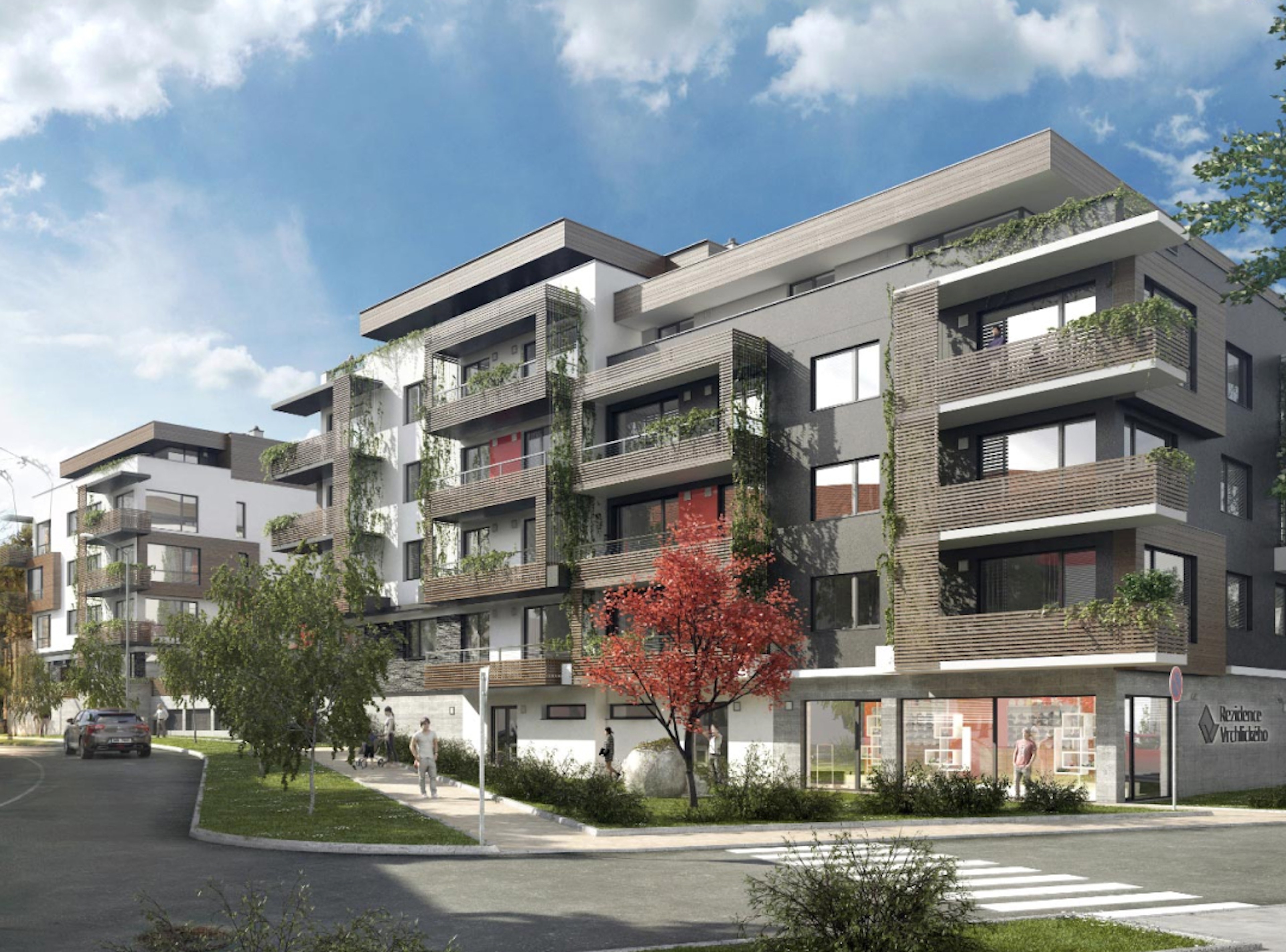 Mezzanine financing for a construction phase

The details below are valid as of the start of the fundraising period, 31/1/2022.

We offer you participation in provided for the purpose of financing part of the project costs of Stage III of the residential project Rezidence Vrchlického in Jihlava. During the construction of the third and final stage of the project, the previous Stage I+II will be completed. All stages are being implemented by a single project company, therefore the repayment of the loan is dependent on the successful implementation of the entire project. A total of 119 residential units, 117 garage parking spaces will be constructed within all stages. Phase I+II of the project is at an advanced stage of construction (as of 31 December 2021, the project was at 57.4% of the project cost with occupancy expected in July 2022) and has pre-sales in excess of 100% of the minimum required proceeds. The Upvest loan is structured such that if, as of 31 October 2022, among other things

The loan is secured by a notarial deed for direct execution and acknowledgement of debt. Interest is not payable during the term of the loan and is payable together with the principal no later than the final maturity date and will be subordinated, together with the principal of the loan, to the Senior Lender's loan used for the completion of Stage I+II and, if the loan is repaid from the proceeds of Stage III, will be subordinated to the Senior Lender's loan used to finance the costs of Stage III. The expected maturity is as follows: CZK 9 million (26%) of the principal and all accrued interest to date on the loan from the proceeds of Stage I+II upon repayment of the Senior Lender within an expected 6 month horizon, the remaining CZK 26 million (74%) and all accrued interest from the sale of the Stage III units within an expected 18 month horizon. Unless the above conditions are met, the Upvest loan must be repaid in full from the proceeds of Stages I and II after repayment of the senior lender's loan to finance the first two stages.

The developer is obliged under the loan agreement to, among other things, comply with the maximum debt to value (LTV) and maximum debt to cost (LTC) ratios for the project. This maximum limit was set at 85% for LTV and 90% for LTC (taking into account the pre-sales of the project). The maximum predicted LTV over the course of the loan relationship would be 77,1 % and the LTC 83 %.

Legal due diligence did not identify any facts that would jeopardise the granting of the loan. Emphasis was placed on assessing the contractual relationships of the project company, the validity of the public permits for construction, the construction contract and other potential legal risks, including a detailed review of historical litigation involving the project company.

Technical due diligence did not identify any facts that would jeopardise the granting of the loan. The main focus of this review was to check the final building permit, the works contract, the evaluation of the construction cost according to the works contract, the project schedule and other potential technical risks. Prior to the disbursement of the loan, the technical consultant will again check the project for constructability and compliance with the project schedule and financial plan.

From the conclusions Sensitivity analysis shows that even with a decline in sales prices Stage III up to 23.2% below the minimum yields under the loan agreement and without any change in other assumptions, Upvest can be expected to repay the loan, including accessories. Even if the implementation of Phase III is extended by 12 months beyond the expected repayment date of the Upvest loan, the project remains profitable on the basis of ROIC at 1.06x.

Among risks of this investment opportunity include the legal risks associated with the project's history, which are described in more detail in the section Legal due diligence and have been assessed by Upvest's legal advisors as low, with a non-final decision in favour of RVD Jihlava, the project company, and a non-final order to discontinue the appeal proceedings in respect of the dispute challenging the ownership of the real estate. The condition for Upvest to draw down the loan is that this decision is legally binding. Possible risks are also a drop in market prices of flats, an increase in costs, especially financial costs due to the rising PRIBOR reference rate or an extension of the project implementation schedule. However, this is not an exhaustive list of the project's risks, of which there are many more. If certain risks are realised in a manner that prevents the developer from meeting the conditions of Upvest remaining in the project until the completion of Stage III, then mitigation of the risks should occur through repayment of the Upvest Loan, including the facilities, from the proceeds of Stage I+II upon repayment of the Senior Lender.

Participation in to finance the development project Rezidence Vrchlického in Jihlava.

The developer of the project is RVD Jihlava s.r.o., which is backed by Mr. Ing. PSJ has a long history of implementing a number of residential development projects, administrative and business centres, commercial centres and industrial parks. Originally, the Rezidence Vrchlického project was part of PSJ's projects, specifically the development part of the holding. PSJ a.s. is currently in bankruptcy and its assets have been declared bankrupt, however, the sole shareholder of the project company is Mr. František Vaculík and the project company is not part of the PSJ group.

The developer will use a mezzanine loan from Upvest for the purpose of financing part of the project costs. The loan is provided for the duration of the construction period of Stage III of the project. This construction commenced in the last quarter of 2021 and will run for a certain period of time in parallel with the completion of the previous Stage I+II, which is expected to be completed and approved in June/July 2022. In the event that the conditions defined below are fulfilled no later than 31 October 2022, only the interest accrued on the Upvest loan and the principal of CZK 9 million will be repaid from the proceeds of Stage I+II upon repayment of the senior lender. In the event that these conditions are not met, the entire Upvest loan including interest will be repaid upon repayment of the senior lender from the proceeds of Stage I+II.

The developer may repay the loan from Upvest no later than the final maturity date, in one lump sum or in instalments. Following the completion of Stage I+II of the project (the agreements on future purchase contracts for all units of the Stage I+II project have now been executed), the realisation of the proceeds from these stages and the repayment of the senior loan, it is expected that the principal amount of CZK 9 million and the interest accrued to date on the entire loan will be repaid. The repayment of the remaining principal of CZK 26 million is planned after the completion and realisation of the proceeds of Stage III, if the developer meets the conditions specified below by 31 October 2022 at the latest; otherwise, this part of the loan will also be repaid from the proceeds of Stage I+II after the repayment of the senior loan. The investor shall share in the proceeds from the date of successful fundraising until the loan is repaid in full. The actual interest on the drawn down portion of the principal commences on the date of drawdown of the loan by the developer and ends on the date of receipt of the repayment of the principal by the lender. The proceeds will be paid to the investors immediately upon receipt of the relevant instalment by the lender.

The time lag between the assumed maturity date and the final maturity date allows the borrower to repay the loan when sufficient sales are achieved upon completion of construction to fully repay the Senior Loan and subsequently the Upvest Loan. It also provides additional provision for any delays in construction execution or other complications.

Together with principal repayment after each loan repayment