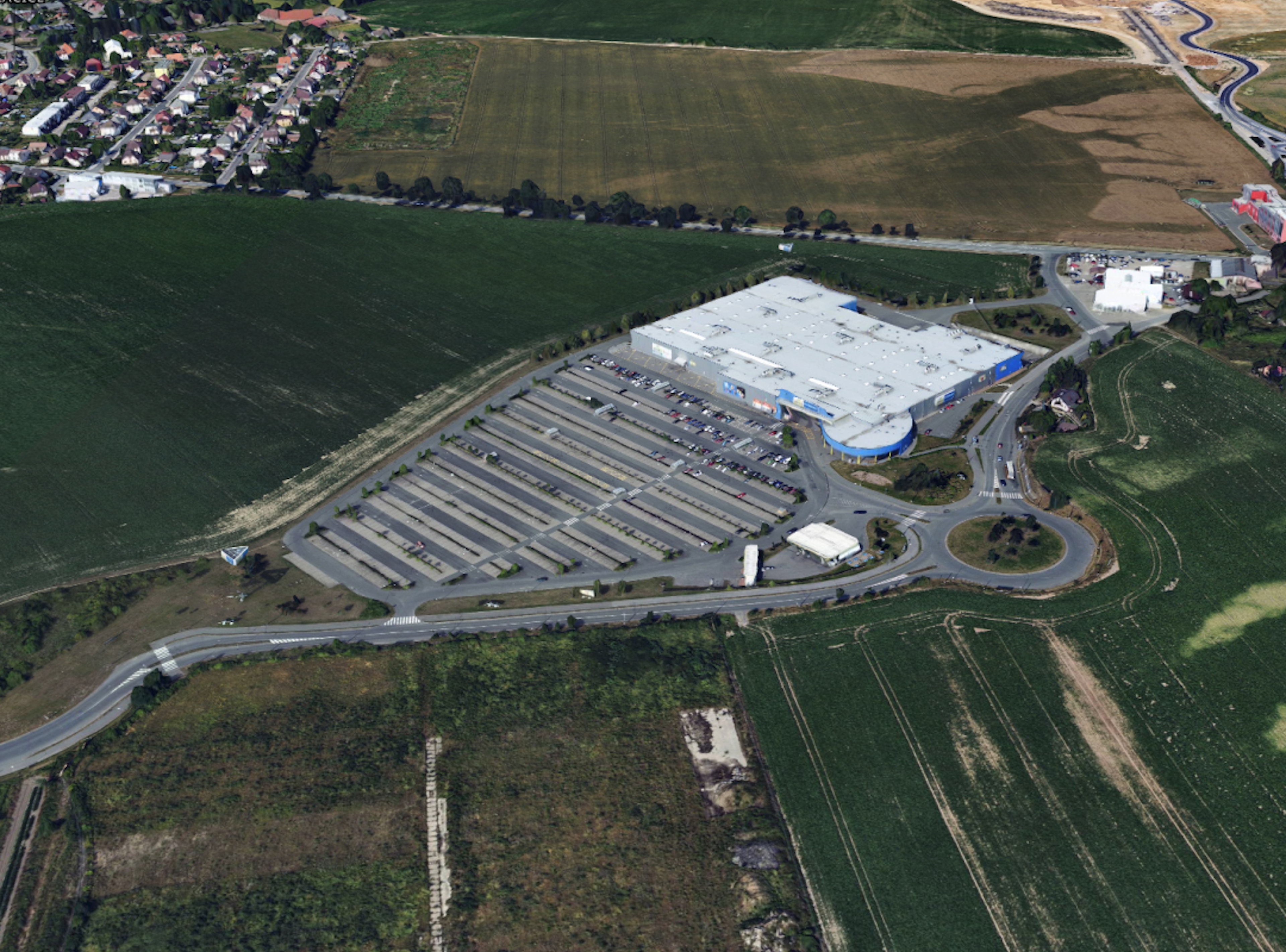 Mezzanine financing for reconstruction and stabilization

The details below are valid as of the start of the fundraising period, 30/3/2022.

We offer you participation in the financing of the reconstruction of the shopping centre in Hradec Králové - Kukleny ("OC Kukleny"). is provided for the purpose of refinancing part of the borrower's own resources invested in the project. Developer of the project is the Traxial a.s. Group ("Developer"), which purchased OC Kukleny in the summer of 2021 from the original owner Albert Česká republika, s.r.o. ("Albert"). The senior loan will most likely be provided by Česká spořitelna a.s.

The renovation will take place from 15.03.2022 to 15.09.2022. The tenants' interior fit-out will be carried out between 15.07.2022 and 30.10.2022 and the shopping centre will be fully operational again from November 2022. The project currently has leases and future leases for 91% of the total area of the OC (the remainder is warehouse space which is not currently being considered for lease). The most significant tenant will be the former owner of the Albert building, which provides a rent collection guarantee for smaller tenants for a period of two years from commencement of operations. Albert's guarantee is equivalent to approximately 71% of OC Kukleny's total expected revenues. Other tenants (outside the guarantee) will be Jysk, TEDi, KiK and Pepco.

The Upvest loan is provided for the period of reconstruction and stabilisation of operations. Interest payments will be made annually on 31.12. after the approval of the senior lender, and the principal is payable in one lump sum, no later than the final maturity date of the loan, i.e. 31.03.2028. However, the loan is expected to be repaid on 31.03.2023, when the project should be sold to ZDR Investments or the Upvest loan should be replaced by a loan from the developer's shareholder. The subordination agreement with the senior lender will provide for repayment of the Upvest loan in these two cases. Should the project be extended beyond expectations, the interest rate on the Upvest loan will increase from the original 7.8% p.a. to 15.0% p.a. starting 01.04.2023.The increase in the interest rate should act as an incentive for the developer to repay the Upvest loan as soon as possible, either from the sale of the project or as a substitute for its own loan.

The estimated sale price of the project by the developer and ZDR Investments is CZK 556 million. CZK. The future estimated value of the project according to Upvest is CZK 503.8 million. CZK. In order to fully repay the Upvest loan including interest, the sale price of the project is required to be higher than the sum of the debts to Upvest and the senior lender, which we expect to be 390 million CZK as of the expected maturity date. CZK. Thus, it can be considered that there is sufficient room for a possible reduction of the sale price in case of unexpected changes in the project. Predicted level of the indicator after completion of the reconstruction until the expected maturity is 1,40x. This means that the operation of the shopping centre under the existing and future lease agreements, net of operating costs, taxes and interest and principal repayments on the senior loan, should generate free cash flow in excess of 1.40 times the estimated interest payment on the Upvest loan. Estimated maximum value over the life of the loan is 84,9 %. Maximum limit is set at 90,0 % in the loan agreement. The estimated maximum over the life of the loan is 73,9 %. The maximum limit is set at 77,5 % in the loan agreement.

Legal due diligence did not identify any facts that would jeopardise the granting of the loan. Emphasis was placed on the assessment of the contractual relations of the project company with emphasis on lease and future lease agreements, the validity of public permits for the construction, the construction contract and other potential legal risks.

Technical screening also did not identify any facts that would jeopardise the granting of the loan. The main focus of the technical review was on the assessment of the cost of the reconstruction works, related works contracts, estimated operating costs and other technical aspects of the project. The technical review's observations, if any, were reflected in the developer's additional obligations under the loan agreement.

The principal risks of this investment opportunity include the risks associated with the repayment of the Upvest loan from the sale of the project, specifically the decline in the sales price due to the increase in the capitalization rate or the decline in the realized . In addition to these commercial risks, the project is also exposed to construction and implementation risk. In the section Sensitivity analysis these named risks are quantified. However, this is not an exhaustive list of the project risks, of which there are many more.

The product described in this Investment Analysis is participation in a mezzanine loan for the purpose of refinancing part of the borrower's own resources invested in the OC Kukleny development project. The refinancing will take the form of a partial reduction of the sole shareholder's loan.

Upon completion of the reconstruction and commencement of operations, OC Kukleny will be a fully operational shopping centre, with a variety of tenants and an anchor tenant - the food retailer Albert. Proceeds from the monthly rent will be used to cover operating costs, finance costs on Senior Lender loans and Upvest. Interest income will be paid to investors annually on December 31, subject to the approval of the Senior Lender.

The developer of the project is Traxial - Merkur s.r.o., a company backed by the Traxial a.s. development group. During its existence, it has successfully completed more than 40 buildings for Czech and foreign investors with a total investment volume of more than CZK 2.7 billion. The sole shareholder of Traxial a.s. since its foundation is JUDr. Zdeněk Prázdný. The Group has long been cooperating with major tenants (e.g. Billa, Penny, JYSK). Completed and long-term occupied properties are subsequently sold to ZDR Investments real estate funds. The developer has previously successfully implemented a similar business model with Albert, which is now being implemented for OC Kukleny (e.g. the Albert Opava project, Retail park Česká Lípa, Albert Chrudim, Albert Přerov or Albert Svitavy). These projects are now owned by the ZDR Investments funds.

Upvest provides for the reconstruction of the property and the period of stabilisation of operations, but no later than until the project is sold to ZDR Investments or otherwise sold. The loan will be provided in the form of refinancing of the developer's own resources invested in the project. Senior financing for the reconstruction and subsequent operation will be provided by Česká spořitelna a.s. ("Senior Lender"). The Loan will be subordinated to the Senior Lender's claim, but the subordination will allow for repayment of the Upvest Loan in the event of a sale of the Project or by way of a replacement of the Upvest Loan by a loan from a shareholder of the Borrower.

The developer is obliged to maintain the value of the indicator below 77.5% and the LTV ratio below 90% throughout the term of the loan relationship. After the completion of the renovation, and therefore after the restart of operations, the indicator is further monitored which must be greater than or equal to 1,30x. Investors will be informed of the progress of the project on a quarterly basis (see section Check).

Developer may repay the loan from Upvest no later than the final maturity date, in one lump sum or in instalments. The investor shares in the proceeds from the date of the successful fundraising until the loan is repaid in full. The actual interest on the drawn down principal portion begins on the day after the loan is drawn down by the developer. The proceeds are paid to investors after a given loan or interest payment by the developer, and the proceeds corresponding to the reservation fee (i.e. the reservation of funds until the conditions for drawdown are met by the borrower) will be paid to investors upon drawdown of the loan.

Developer may repay the loan from Upvest before the next maturity date. In such a situation, the investors' return is protected by the developer's fees, which are set at a level to match the nominal return that the investor would have received if the loan had been repaid on the date of next maturity (30 September 2022).

It is assumed that developer upon completion of the refurbishment and commencement of operations, will sell the property or the commercial interest to ZDR Investments, where the Upvest loan will be repaid no later than the date of the transaction, which is expected to be 31.03.2023.

Net yield for the Investment Club

Interest payable annually on 31 December from the project's operating income.